WWF-New Zealand: Submission in support of a Temporary Closure (under s186A) on Waiheke Island. 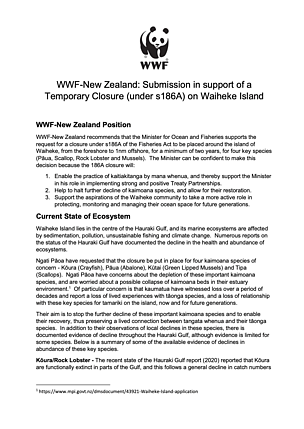 WWF-New Zealand: Submission in support of a Temporary Closure (under s186A) on Waiheke Island.
© WWF-NZ
WWF-New Zealand supports Ngāti Pāoa’s request for a closure under s186A of the Fisheries Act to be placed around Waiheke Island from the foreshore to 1nm offshore, for a minimum of two years, for four key species.

Waiheke Island lies in the centre of the Hauraki Gulf, and its marine ecosystems are affected by sedimentation, pollution, unsustainable fishing and climate change. Numerous reports on the status of the Hauraki Gulf have documented the decline in the health and abundance of ecosystems.

Ngati Pāoa have requested that the closure be put in place for four kaimoana species of concern - Kōura (Crayfish), Pāua (Abalone), Kūtai (Green Lipped Mussels) and Tipa (Scallops). Of particular concern is that kaumatua have witnessed loss over a period of decades and report a loss of lived experiences with tāonga species, and a loss of relationship with these key species for tamariki on the island, now and for future generations. Their aim is to stop the further decline of these important kaimoana species and to enable their recovery, thus preserving a lived connection between tangata whenua and their tāonga species.

WWF-New Zealand: Submission in support of a Temporary Closure (under s186A) on Waiheke Island.
© WWF-NZ Enlarge