‘Ghost Gear’ is haunting our oceans and seas 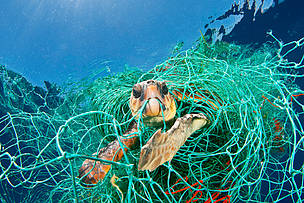 Our oceans are being haunted by ‘Ghost Gear’. This abandoned or lost fishing gear is the deadliest form of plastic debris for marine life and is trashing our ocean and beaches around the globe. It is also a large contributor to the ocean plastics crisis. About 46% of the Great Pacific Garbage Patch (which covers an area six times the size of New Zealand) is made of ghost gear.

A new report from WWF, Stop Ghost Gear: The most deadly form of marine plastic debris, shines a lights on how destructive ghost gear* is for our environment and wildlife. It is responsible for harming 66% of marine mammal species, half of seabird species and all species of sea turtles, while often subjecting them to a slow, painful, and inhumane death. It also damages vital marine habitats such as coral reefs and mangroves and threatens the food sources and livelihoods of coastal communities and fishers.

From 1995-2005, the rates of entanglement for the fur seals in Kaikōura are among the highest reported in the world. Just last month, a New Zealand fur seal pup was found entangled in fisheries gear on a beach north of Kaikōura. Rescuers said the pup became rapidly weaker through the afternoon, convulsing periodically. Despite being freed, the pup died the same evening. (this story can be found here) Plastic is putting our local and native species, some of which are already endangered, at further risk. A handful of studies have demonstrated that ingestion and entanglement have caused harm to endangered green turtles, seabirds, fish, and fur seals.

“While the consequences of plastic waste are finally starting to receive the attention they deserve, there’s still too little awareness about the catastrophic harm caused by ghost gear. This needs to change urgently given that it’s the most deadly form of marine plastic debris and that it can linger in our oceans for centuries, wreaking havoc like some kind of immortal menace: continuously and cruelly killing whales, dolphins, seals, seabirds, turtles and sharks, and damaging vital ocean habitats.

“This report unveils the impact and the tragic scale of this invisible ocean killer, and how it is linked to the practices of fishers and the fishing industry, as well as making it very clear that the current legal framework on marine plastic pollution and ghost gear is fragmented and ineffective. This is a global problem which requires coordinated action across the world, which is why WWF urges governments and businesses to support the establishment of a new global UN treaty on plastic pollution that sets out global goals and binding targets for both land- and marine-based plastic pollution, which in turn can help drive robust local regulation of ghost gear. We must stop ghost gear from decimating marine life and drowning the ocean we all depend on once and for all.”

Aotearoa is already ahead of many countries, our Government has joined Global Ghost Gear Initiative (GGGI) - a global alliance of fishing industry, private sector, corporates, NGOs, academia and governments focused on solving the problem of lost and abandoned fishing gear worldwide. The GGGI works to remove abandoned nets from the water, establish gear collection and recycling programs, develop tools that enable better tracking and recovery of gear, and move towards improved gear management and more sustainable fishing practices in small-scale fisheries. But there is still more to do.

“It is heartening to see New Zealand step up to the challenge and commit to the Global Ghost Gear Initiative, but the work does not end there. We have a chance to lead the world by stepping up to support the establishment of a new global treaty to stop plastic pollution. There is no place on Earth that has not been touched by plastic. It’s estimated people consume a credit card of plastic a week. We’ve made an almighty mess, and now it's time to clean up,” says Livia Esterhazy, WWF-New Zealand CEO.