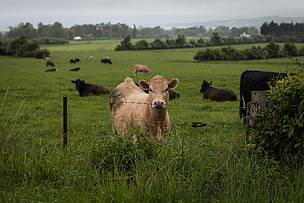 Cow in the South Island, New Zealand
© Eric Schroen
"We applaud the Green Party for putting unsustainable farming practices on the agenda this election.

As was stated this week in WWF's Living Planet 2020 Report, we have seen a decline in global wildlife populations by 68% over the last 50 years.

The way we grow, produce, and consume food is one of the biggest contributors to the decline of wildlife and biodiversity.

As a food producing nation, Aotearoa has the potential to be at the forefront in sustainable and regenerative farming practices. By proactively working with farmers on sustainable practices, focusing on the health of our soil, and shopping locally, Aotearoa could lead the world in 'bending the curve' of biodiversity loss and ultimately sustain ourselves as a species," says Livia Esterhazy, WWF-New Zealand CEO