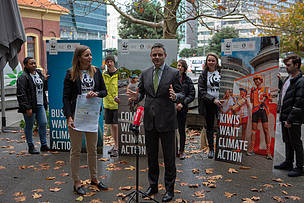 WWF-New Zealand and Generation Zero today welcomed the launch of the government's 'Our Climate, Your Say' consultation on the elements of a new climate law.

In response Livia Esterhazy, CEO of WWF-New Zealand said “The launch of today's consultation process is a big step towards building the legal framework we need to unlock our chance for a fair, just transition to a zero emissions economy. We really encourage all businesses, community groups and New Zealanders who are passionate about having a safe climate future to take the chance to submit and make their voices heard.”

“We've been reading the consultation documents carefully. ​I​t is great to see how closely ​many of ​ the government's preferred options mirror the ideas that we and our supporters have been calling for since our friends in Generation Zero first proposed this new climate law. This shows what's possible when people, businesses, and communities work together.

"Yesterday, we delivered an open letter supporting the Zero Carbon Act to Minister Shaw. The letter had over 200 signatories, including businesses big and small, community groups, churches, international development agencies, and mayors from up and down the country. We know that this momentum will continue until the Zero Carbon Act is passed."

Generation Zero’s national Zero Carbon Act convenor, Lisa McLaren said “It is extremely gratifying to see all the hard work we have put into the Zero Carbon Act campaign over the last two years result in today's public consultation launch. We drafted the Zero Carbon Act framework because we knew there wasn’t time to keep waiting for politicians to take meaningful action on climate change - our futures are on the line.

"We need to demonstrate the massive groundswell of support for this new climate law, so that all political parties support it when it reaches Parliament in October. Climate change is too big and too urgent to continue to be a political battle.

"We look forward to helping people all over Aotearoa New Zealand get involved with this consultation process."