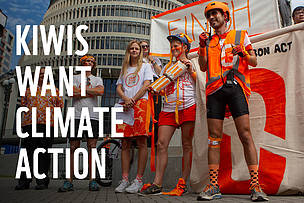 The letter congratulates the government on setting “a new, bold, ambitious goal of getting our country to net zero emissions by 2050” and expresses confidence that this goal is 100 per cent possible.

The signatories pledge to keep “rising to the challenge” of moving to a clean energy future, and offer their support to government in building the “architecture for a fair, equitable, just transition to a safe climate future for all New Zealanders”, like the Zero Carbon Act.

WWF-New Zealand CEO Livia Esterhazy said “Today, New Zealand businesses, communities and leaders have spoken as one. We know that together it’s possible to cut our emissions to net zero by 2050. Now is the time for government to build the legal and policy framework to ensure that this happens, and to make sure that the transition is fair and just for all New Zealanders.”

“Two years ago, we delivered another open letter on climate change to the previous climate minister, Paula Bennett. It was signed by 65 businesses, community groups, and influential Kiwis. We’re blown away to have more than three times as many signing on this time. That shows just how passionate we have become in this country about this critical issue.”

Generation Zero’s national Zero Carbon Act convenor, Lisa McLaren said “After pushing for a new climate law for the past two years, we’re thrilled to have this support. It’s incredible to see the mayors of Auckland, Wellington, Christchurch, Whanganui, Gisborne and Hutt City all speaking out, alongside businesses and community groups big and small. Kiwis up and down the country are doing their bit to ensure a safe climate future.

“Tomorrow, the government will be beginning a consultation on the proposed new law that will become the Zero Carbon Act. We hope that all those who are inspired by this letter’s huge, unprecedented statement of unity, hope and ambition will take the time to make a submission in the next six weeks. Young people will be the hardest hit by climate impacts and we are calling on young people to have their say to protect our future.”

Meridian Energy’s chief executive Neal Barclay said “While New Zealand remains small in global terms we need not underestimate how powerful it is to work as individuals, organisations and as a society to be part of the solution to take action on climate change. That’s why Meridian is one of many businesses supporting the need for a Zero Carbon Act.”

“Showing Meridian’s support means we believe we can and must act on the opportunity to create a prosperous future for our customers, communities, our country, and the planet.”

Andrew Eagles, chief executive of the New Zealand Green Building Council said “Now’s the time to kick climate pollution out of Aotearoa, across all sectors, including our buildings. That’s why a comprehensive climate change-busting Zero Carbon Act is absolutely necessary, and is great news for our businesses, for our whānau, for the New Zealand environment, and for everyone who wants to breathe fresh air and swim in unpolluted water.”

Louise Aitken, CEO of the Ākina Foundation said "The Ākina team are proud to be supporting Aotearoa's zero carbon future. We believe that impact has the power to transform New Zealand's economy, with social & environmental innovation key to unlocking a sustainable future for our land, our people and our communities."

Kath Dewar, managing director of GoodSense said "We signed to say 'Kia kaha on climate action'. It's time to Act! As customers we love climate action - and as citizens we need it. Now."

Adelia Hallett, Forest & Bird climate advocate, said “We’ve recently seen albatross eggs that don’t hatch due to warmer weather, kōkako nests washed away in floods, and korora starving due to increased storms. Climate change is adding to the enormous pressure on our native wildlife. That’s why we absolutely support this call for the Zero Carbon Act." 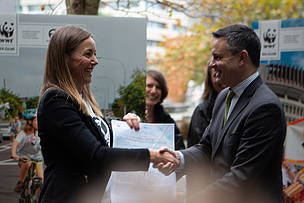