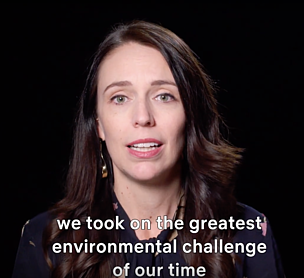 Speaking as one of the Our Planet: Visionaries*, Prime Minister Ardern said, “There is something very special about the way New Zealanders regard their environment. That sense of Kiatiakitanga - guardianship - that we do have this duty to leave our part of the world, indeed the world itself, better than we found it.”

Netflix, in collaboration with WWF, released Our Planet at this critical time- as every creature, citizen, and country on earth face threats like never before. Recent figures [2], from WWF’s Living Planet Report 2018, shows global populations of vertebrate species have, on average, declined by 60 per cent since 1970. But it’s not just wildlife that’s negatively affected by climate change, humans also live under threat of extinction. WWF believes this global dilemma can be solved with a global response.

“In 50 years time, I hope we look back and say, we took on the greatest environmental challenges of our time and we won. We just changed the way we lived, that we changed our outlook on the use of fossil fuels, that we fundamentally transitioned our economy and that we are all the better for it.” says Prime Minister Ardern.

WWF-New Zealand CEO Livia Esterhazy said, “We know the science says urgent action is required to save our planet. We know we need to change the way we live, not just for ourselves but for our mokopuna’s tomorrow. We know together it’s possible to reverse the damage we have caused. And we know we need real leadership to make this happen. We echo the Prime Minister’s vision for New Zealand and the World’s future.”

Go to OurPlanet.com to find out how you can help our planet to thrive again, add your voice to the call for urgent action, make a pledge to change the way you live, and explore our astonishing planet. Follow Our Planet on Instagram, Twitter and Facebook and be part of the conversation with #ShareOurPlanet.