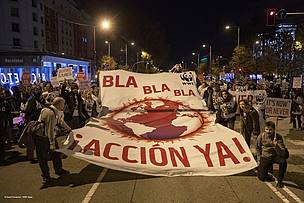 Scenes from the climate march in Madrid, held during the CO25 climate talks.
© David Fernández - WWF Spain
The longest UNFCCC COP session ever ended Sunday morning with big emitting countries - like the United States, China, India, Japan, Brazil, Saudi Arabia and others - shirking their responsibility to reduce greenhouse gas emissions as they blocked progress in Madrid. Despite heartfelt demands for action from vulnerable countries, civil society, and millions of young people around the world demanding immediate climate action, large polluters resisted all efforts to keep global warming below 1.5°C.

Although described as the ‘ambition’ COP, what was evident in Madrid was a lack of political will to respond to the science at the necessary scale. Regressive governments put profit over the planetary crisis and the future of generations to come. With the exception of the European Union, the talks showed a complete lack of urgency to act from the big emitting countries.

The outcome of the talks offers no forward movement on the organisation of a carbon market, respect for human rights, public participation, or financing loss and damage from climate impacts. These countries will have to justify their positions which are increasingly at odds with the science and public opinion.

Manuel Pulgar-Vidal, leader of WWF’s global climate and energy practice said: “Despite the efforts of the Chilean Presidency, the lack of commitment to scale up climate action by big emitting countries was too much to overcome. Their position is in stark contrast to science, rising demands from the streets and the harsh impacts already felt in vulnerable countries.

“We know what has to be done, and we have run out of time for backtracking or debate. 2020 must be different and we will fight even harder for people and nature. Governments will return home to face increasing frustrations from youth movements, citizens and vulnerable communities suffering from the impacts of the climate crisis, and will have to answer to them.

“Countries still have the chance to show they are committed to tackling the climate crisis by submitting enhanced climate pledges aligned with science as soon as possible in 2020” he emphasized.

Our own CEO at WWF-New Zealand, Livia Esterhazy, is similarly disappointed, saying: "Selfish. Is there a better word to describe the behaviour of the world's biggest emitters?

"The United States, China, India, Japan, Brazil, Saudia Arabia and others are holding the world hostage so they can continue their business as usual. If they want to be considered world leaders they should act like it because our planet is not able to sustain business as usual. Instead it is time for them to be brave, to be selfless, to be true leaders, to listen to the millions of voices pleading for change.