A homecoming for native kōkako 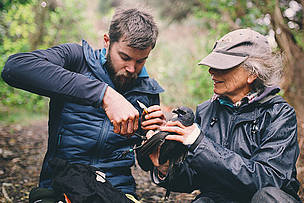 Kōkako ecologist Dave Bryden and kōkako team leader on Tiritiri Matangi Island Morag Fordham.
© Amanda Rogers
Kōkako made a triumphant return to Mount Pirongia on Saturday, when 14 birds with a special connection to the area were released on the maunga.

The distinctive birds with the bright blue wattle and haunting call had not been heard on the mountain since the 1990’s, but have been the subject of a long-running project by a local conservation group determined to bring them back.

These birds are descendants of the last kōkako from the Pirongia area, and were captured by a team the week before on predator-free Tiritiri Matangi Island. This is one of several kōkako ‘translocations’ taking place this winter.

“I was a minion among the leading maestros of kōkako catching, and saw first-hand the incredible care taken in planning a translocation of this scale,” said Clare St Pierre, Chair of Pirongia Te Aroaro o Kahu Restoration Society.

“Being close up to the birds and hearing their utterly divine singing while on the Island was beyond thrilling. I’m totally stoked that we have finally been able to return them to a safe home, here on their own Mount Pirongia.”

The Society has led the restoration of kōkako to Mount Pirongia by creating a safe environment for this species. It’s one of many local community conservation groups that have received funding through WWF-New Zealand’s Habitat Protection Fund, administered on behalf of The Tindall Foundation.

Thanks to the funding, the group was able to undertake pest control over 1,000 hectares in Pirongia Forest Park, targeting rats and possums. The reduction in pest species enables these birds to start life in their new home in safety.

“I was so thrilled that we could support this project to bring the call of the kōkako back to the mountain,” said Michele Frank, WWF-New Zealand’s Innovation and Programme Manager.

“This is a great moment for one the of many amazing conservation groups that turn their passion for nature into action. This victory for pest control shows that together, it’s possible to protect our shared natural and cultural heritage.”

The birds were welcomed back to the area by local iwi in a ceremony on Saturday.

The translocation this weekend is part of a larger programme to establish a population on the maunga. It’s hoped that in time, the birds will find mates and establish a stable, self-sustaining population.

The public are encouraged to report any kōkako sightings around Pirongia Forest Park.