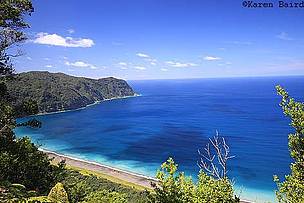 “The overwhelming majority of New Zealanders want to see the unique Kermadec region protected,” said WWF-New Zealand Senior Campaigner Alex Smith. A Colmar Brunton poll conducted in May this year found that 89% of New Zealanders and 86% of Māori support the creation of the Sanctuary.

“The Kermadec Islands and the surrounding oceans are one of the most special and pristine marine environments in the world. Whales, dolphins, sharks, albatrosses, petrels, turtles, deep sea corals and unique vent creatures all have a home in this incredible place, and the science shows that many species are still to be discovered,” said Alex Smith.

“All the science reinforces the fact that it is an exceptional area – with globally recognised biodiversity and geodiversity hotspots – and it should be protected for future generations now.

“There have been genuine concerns raised around the process for the developing the Kermadec/Rangitāhua Ocean Sanctuary. As a country we need to learn from these and set up a framework for developing marine protection that involves iwi in decision making at every step.

“But we shouldn’t let the fishing industry use the concerns around consultation as an excuse to derail marine protection for the Kermadecs.

“We acknowledge the months of negotiation between Te Ohu Kaimoana and the Crown on the sanctuary, and fully support the government not compromising on allowing fishing to take place in this important ecological area.

“It seems that it has been genuinely difficult for the government to find a compromise as the fishing industry lobbyists seem intractably opposed to marine protection that stops fishing.

“The fishing industry has never had an absolute property right over New Zealand’s oceans as they seem to be claiming. Fishing has always been subject to regulation to look after the health of our oceans.”

WWF-New Zealand has campaigned for more than eight years alongside the Pew Charitable Trusts, Forest & Bird, local iwi and thousands of New Zealanders for the creation of this sanctuary.