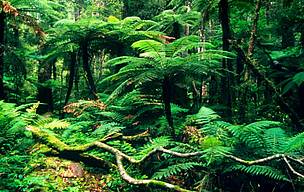 NZ is renowned around the world for its clean, green image - but for how much longer?
© Kevin Schafer / WWF
It seems New Zealand’s clean green image is under sustained attack at the moment. Late last year we had Fred Pearce in the UK’s Guardian newspaper having a go at our rising greenhouse gas emissions; that followed the New York Times which in September had dissected the various claims around hoki, one of our biggest fisheries. And now, we have the New Zealand Herald doing the same across a wide range of environmental issues – and doing quite a good job of pulling real data out of official government documents.

What’s surprising is just how many times stories like these will have to run before someone in government sits up and takes notice. And its not just the current government which, although it has made some very poor choices such as looking at opening up conservation land for mining, failing to protect Hector’s dolphin from fishing, and watering down the Emissions Trading Scheme to the point where it is unlikely to achieve its stated goals, is not doing much worse that the previous Labour-led administration which also failed to take real action on climate change or endangered species.

The Herald article kicks off with a recollection of visiting Norwegian academics visiting St Kilda beach in Dunedin, and seeing a sign saying it was closed due to faecal contamination. This struck a strong chord with me; WWF has funded hundreds of communities around the country over the last 10 years through our Habitat Protection Fund . I’ve been privileged to be part of the expert panel making decisions on which projects get funded.

But one of my strongest memories is visiting the Otago Peninsula, where we funded the Yellow-Eyed Penguin Trust, and seeing the exact same sign, next to what looked like pristine sand and clear seas. I was shocked then, and I’m still shocked now, that a small remote city on the edge of one of the world’s greatest oceans can, by simply pumping its waste into the sea, put such places out of reach. That’s bad enough for people, but at least we can read the sign and stay clear; our threatened wildlife can’t.

NZ is renowned around the world for its clean, green image - but for how much longer?
© Kevin Schafer / WWF Enlarge