Embracing cameras on fishing boats will be game-changing 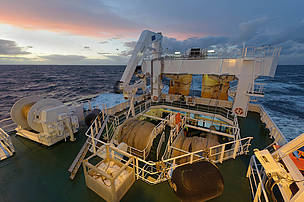 Deck of pelagic trawler, Scotland, UK
© naturepl.com / Chris Gomersall / WWF
WWF believes that putting cameras on commercial fishing boats will be a game-changer for New Zealand. Enhancing public trust and providing accurate data will provide opportunities for much better management of our fisheries.

However, the recent announcement of the latest review on fisheries regulations effectively confirmed that this will not happen during this government.

Scrutiny of industrial fishing has always been challenging. As it takes place away from the public eye, the regulator has a tough job. The observer programme does its best but, with thousands of boats on the water, can only hope to monitor a fraction. Our system requires a high degree of reliance on fisher self-reporting.

Despite the fact that many skippers will do the right thing, it takes just one rumour of illegal discarding, misreporting or ignoring best practice to reinforce negative perceptions and create suspicion.

Tarred with the same brush, this makes it almost impossible for responsible fishers to gain the trust and respect they deserve.

Trust is vital. The public needs to be able to trust the industry when choosing which fish to buy, and also trust those responsible for regulating the industry.

We need cameras on boats because they affect self-reporting. A study in a major Australian fishery showed that, when there's a camera on board, skippers self-report about 700 per cent more marine mammal catch.

Fishing companies Sanford, Moana New Zealand and Leigh Fisheries are supporting the trial of cameras on boats as part of a broader effort to reduce the accidental catch of endangered seabirds. Sanford has also publicly stated that it supports having cameras on all of its vessels.

But none can go it alone. There must be a formal, regulated system. Solutions must be found to address issues of data collection, storage and ownership; create a robust system for monitoring; create a fit-for-purpose regulatory regime; ensure camera specifications are tailored to different types of fishing vessels; and engage with fishing crews to promote understanding of what the cameras are for and how the data will be used.

Not one of these issues is insurmountable. And we've been working on this for years – there's been more than sufficient time to find solutions.

But progress has foundered on the rocks of industry opposition. Those who see fish as a low-value commodity. Those who resist change, partly to keep costs low. Those who think that trust and integrity are things that can be bought or ignored.

Those people appear to hold sway with politicians, but we know there are more of us who see our nation's fishing future with the higher value that the world places on sustainable seafood. Forward-thinking individuals who know that trust can only be earned, and having a camera on board is one step in that direction.

The overwhelming majority of Kiwis support this. Colmar-Brunton polling from just two years ago showed that more than eight out of ten of us want cameras on boats.

The public can see it. NGOs can see it. Some fishing companies can see it. Almost everyone seems to recognise that, by putting cameras on commercial fishing boats, New Zealand can reclaim its position as a global leader in sustainable fishing.

WWF-New Zealand stands ready to work with everyone – government, political party, company, crew or skipper – who shares that vision.

This blog first appeared in the Dominion Post/Stuff.