Blockchain: the new frontier in the battle against slavery for sushi 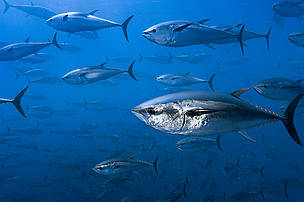 Northern bluefin tuna (Thunnus thynnus) off the coast of Spain.
© Brian J. Skerry / National Geographic Stock / WWF
How can we be sure catching the tuna we’re eating hasn’t also harmed humans? At the moment we can’t. But could new technology bring transparency to the fishing industry, and help stamp out unsafe conditions?

Sushi. We Kiwis love it. Incredible to think that in the 1980s it was still something many of us baulked at – raw fish?

Then, sushi was a high-end restaurant meal for the movers and shakers of our biggest cities only. But now we find sushi being eaten right across this country: in school lunch boxes, regional food courts, big city restaurants, takeaway joints and even at a drive-through restaurant in Auckland. No wonder sushi now rivals fish and chips for title of New Zealand’s National Meal.

It’s no surprise that it’s taken off, though. Most Kiwis love fish, and as we’ve started to focus more on our health and wellbeing in the last twenty years, the shift away from fried takeaway treats to a lighter meal like sushi that usually includes rice and often vegetables too seems logical, and delicious.

But while we Kiwis love sushi, and love fish too; we also like to think of ourselves as living in the land of the fair go. Many of us like to believe the story that ours is a country founded on egalitarian principles of ‘mateship’. And that’s where, for many of us, the discomfort with one of the main ingredients in our beloved sushi – tuna – comes in.

How can we be sure of the origin of the tuna we buy for lunchbox nori rolls; or for our takeaway sashimi plates? Can we be sure the tuna we’re eating has been caught ethically, sustainably and professionally? Were the fishing crew paid a fair wage and treated respectfully?

As seems to be so often the way in 2018 – blockchain technology is a key step in the process of change for good.

This blog was written by WWF-NZ CEO Livia Esterhazy for The Spinoff. Read the full blog on The Spinoff.