New Zealand Lagging Behind Global Movement To Save Oceans 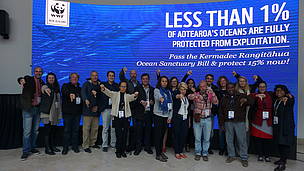 At the fourth International Marine Protected Area Congress in of La Serena, Chile, many people were shocked to hear the New Zealand has protected less than 1% of its marine environment.
© Carol Phua / WWF
In the beautiful Chilean city of La Serena, scientists, leaders, and people involved in protecting the worlds oceans met for the fourth International Marine Protected Area Congress. The key message of the September 4-8 Congress was loud and clear – that rapidly increasing marine protection across our oceans is vital to keep the planet habitable for people into the future.

A hot topic of discussion was how well different countries are protecting their oceans from industrial fishing, mining, and other human impacts.

Many people were shocked to hear that New Zealand has protected less than 1% of its marine environment. They expected us to be performing better and taking better care of our ocean as it is globally important for ocean biodiversity.

When people think of New Zealand they think we are the cleanest greenest country in the world.  It was sad and a little embarrassing to see them realise that we are well behind in doing the right thing for our oceans, our global community, and our future generations.

Luckily, New Zealand is all set and ready to take part in this global effort, with the Kermadec Rangitāhua Ocean Sanctuary waiting in the wings to be given the green light by our Government.  When passed, this will bring New Zealand’s total area under protection to 15% – a much more respectable percentage and much closer to global targets.

In 2010, the Convention on Biological Diversity set a target for 10% of coastal and marine areas to be conserved in marine protected areas by 2020. Then last year, in the largest democratic vote in history, the world pledged to protect 30% of the planet’s oceans by 2030. This was a response to research by marine scientists which shows that at least 30% of each marine biogeographic region needs protection in order to avert large-scale extinction as ocean temperature and acidity rise due to climate change in the next few decades.

Global progress towards these targets has been too slow. Only 3% of the world’s oceans are protected in implemented and actively managed marine protected areas, and of that only 1% is strongly protected in no-take marine reserves.

However, momentum is gathering.  More than 20 marine protected areas have been recently proposed or officially announced, and we can protect over 6% of the ocean just by implementing these.

The world is watching and waiting for New Zealand to live up to our clean green image and take part in global marine protection efforts.  We know how to save the oceans – the science is clear that protecting 30% of habitats is a vital part of securing a living future for our oceans and humanity.  We now need the political will to accelerate and significantly scale up marine protection before it’s too late.  The first step for our Government is clear –  pass the Kermadec Rangitāhua Ocean Sanctuary.

At the fourth International Marine Protected Area Congress in of La Serena, Chile, many people were shocked to hear the New Zealand has protected less than 1% of its marine environment.
© Carol Phua / WWF Enlarge 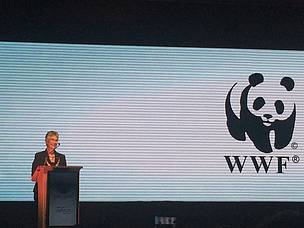