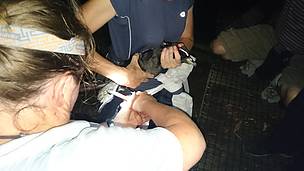 ‘I can get this one,’ says Biz as a loud ‘clacking’ noise erupts in the bush next to us. She jumps off the boardwalk and a minute later emerges with a tāiko, or black petrel, tucked under one arm. She holds the bird firmly – they can move quickly and their sharp bill and claws can easily draw blood.

We are halfway between Heale Hut and the summit of Mount Hobson on Aotea/Great Barrier Island, and it is 10.30pm. We are in the centre of a thirty-five square kilometre study area where, between November and February when the tāiko returns from the eastern Pacific to breed, Dr Biz Bell and her team of three spend up to sixteen hours each day researching one of New Zealand’s rarest birds.

Before cats, rats and other pests were introduced to New Zealand the tāiko bred throughout the North Island and the top of the South Island. Today there are only about 1,000 breeding pairs on Aotea/Great Barrier Island, and another 100 pairs on Little Barrier. Given the history of Aotea, with most of its magnificent kauri forests felled a century ago for houses as far away as San Francisco and Tokyo, it’s a wonder they survived at all.

Mel and Will, the other members of Biz’s team, kick into action quickly once Biz is back on the boardwalk. ‘It’s a newbie,’ says Biz, meaning this is the first time the bird has been back since fledging three years ago. Will fixes a metal, numbered ring around one of the bird’s legs, while Mel paints a stripe of ‘twink’ onto its head. It’s a low-tech but effective way to avoid picking up the same bird again. The twink wears off in a few weeks, and by then the research season will be over.

My companions are fellow trustees and staff from Southern Seabird Solutions, an organisation dedicated to making sure New Zealand-breeding seabirds are not caught and killed by fishing lines and nets. The tāiko is a priority for Southern Seabird Solutions, which has helped forge a partnership with government, the local iwi Ngati Rehua, communities, researchers and others culminating in a collective pledge to ensure their survival which was signed in late 2014. Despite all this, it is the first time some of us have ever seen a tāiko.

Earlier in the day we had been welcomed onto the newly refurbished Kawa, one of four Ngati Rehua marae, by representatives of the iwi. After the formal proceedings in the wharenui, we shared a meal in Hineriri, the wharekai, and talked about our commitment to the survival of the tāiko for future generations.

We manage to catch nine birds, five of them newly returned, before Biz decides that a quick trip to the summit is in order. Throughout the night male and female tāiko take it in turns to guard their nests while their partners fly off to search for food. As our eyes get used to the dark we can see birds circling constantly, working out where to land, and then crashing into the vegetation. About twenty years ago the Department of Conservation built steps and a wooden platform on the summit, to prevent erosion, but they did not foresee the ingenuity of the tāiko. With limited space to take off, the birds soon learned that the platform provided an excellent launching site. Sure enough, after ten minutes we see a bird hop up the steps, start its run and take off.

Just before midnight we head back to Heale Hut for a few hours sleep before walking out just in time to catch our flights back to the mainland. On the final part of the tramp, through the impressive Kaitoke wetland, Becs Gibson, the Department of Conservation ranger who accompanied us throughout the trip, tells us excitedly about her ideas for the future. She worked for DoC in Westland, Stewart Island and Opotiki before joining the Aotea team three years ago. She’s passionate about education, and would love to bring more school groups into the bush to see the birds.

We get a final view of Mount Hobson as the six-seater plane takes off from Claris airport, and we think about Biz and her team starting another long day in the bush thousands of metres below us.

Black petrel researcher Biz catches birds at night, and tags each one with a numbered ring before releasing.
© Chris Howe/WWF Enlarge 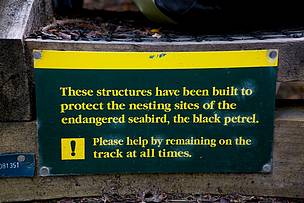 Black petrels need all the help they can get, even in the remote forest of Great Barrier Island.
© Southern Seabirds Solutions Trust Enlarge