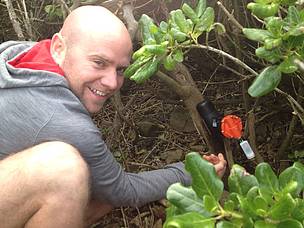 Robbie van Dam from Goodnature Traps checks a rat & stoat trap on Wellington's south coast
© Lee Barry/ WWF
WWF’s Conservation Innovation Awards are now open. We’re looking to find the next great Kiwi innovators – and help them turn their ideas into realities that will help community conservation groups protect our precious spaces and species.
Need inspiration? Then follow our latest blog, featuring New Zealand innovations that are already making a difference to our planet.
Robbie van Dam from Goodnature was brought up on a dairy farm on the West Coast and remembers being impressed by the huge logs being hauled out for the once-thriving native timber trade. First and foremost a problem solver and designer, he claims that he’s more of a considerate designer than a conservationist, despite his inventions being hailed as revolutionising efforts to protect native animal populations around the world.
As an industrial design student in Wellington, Robbie worked part time at DOC, building gadgets for their biodiversity recovery group: binocular-mounted spotlights for night-time gecko watching, kiwi burrow cameras, and kakapo feeders. It was there he came to really understand that the biggest challenge for the conservation sector in New Zealand was the need to control invasive animal predators. Traditional trapping killed one pest at a time, and checking and resetting traps was labour intensive, and could not keep up with pest reproduction rates. Robbie’s idea was simple; what was needed were traps that reset themselves. Bringing the idea to fruition was where the hard work began.
Working with fellow designers Stu Barr and Craig Bond, Robbie received an innovation grant from DOC in 2006 to try out some ideas. After two wildly different prototypes and 3 months of design and testing, in 2010 the team launched a self resetting, humane possum kill trap – and the Goodnature trap was born.
The day I met Robbie on Wellington’s south coast he was checking on the latest Goodnature trap trial – knocking off rats that threaten the capital’s little blue penguin colony. This trial is in suburban Wellington, a place where poisons may be unpopular and harmful. The aim is to encourage more residents to get active in pest control by making the task easy and safe.
As we patrol the shoreline, each orange and black Goodnature trap under the shrubs is checked for bait (tasty looking peanut butter) and kill rate; the counters record 96 overall in the past three months. The compact CO2 gas canister in each trap will last 6 months and kill up to 24 times. The gas fires a captive bolt into the animal for an instant kill, then withdraws to let the body drop. The trap is automatically ready to go again. The counters are critical – while you might expect a pile of bodies under each trap to measure success, the local cats have gotten wise and are popping by to snack on the dead rodents instead! We do count a few bodies which the moggies have missed -  two mice and a huge rat.
Goodnature’s A24 rat and stoat trap, and their original A12 possum trap are the result of countless hours of design and testing.  The early days involved ensuring that the traps would kill every animal instantly. Robbie preferred to test this in the wild, rather than the lab. A few nights spent camping out with two prototype possum traps, a motion sensor doorbell and a night vision cameras was sleepless, but successful.
The Goodnature designers accept they are still refining their products, largely based on results from field trials. DOC has run several large scale trials on conservation land, and community groups are also benefiting from the technology. In 2011, WWF funded a trial of the possum traps in a remote pocket of Taranaki forest, to help local group the East Taranaki Environment Trust reduce possum numbers.  With the trial’s success, the group are now able to reintroduce kokako to their forest later this year. These native songbirds disappeared from the area in 1989.
Goodnature now employ a Wellington-based staff of 10, and source many components from around the country for their NZ-made product. The products are mostly sold online and are available in Farmlands stores nationwide, where the cliental are mainly farmers. Expectation was to shift 1000 units a year, but they’ve just done that number in the first month. Overall they sell roughly 15,000 traps per year.
That’s not including export to locations such as Hawaii, Sweden, the Maldives, Fiji, and Puerto Rico, as the team work their way through tailoring their product to each of the IUCN’s list of most invasive species such as mink, grey squirrel andmongoose. This conservation innovation is now going global.
Blog by Lee Barry, WWF’s Head of New Zealand Projects
Are you the next Robbie van Dam? WWF’s Conservation Innovation Awards are offering $25,000 grants for innovative conservation ideas. To enter, or for more information about the Conservation Innovation Awards go to www.wwf.org.nz/innovation 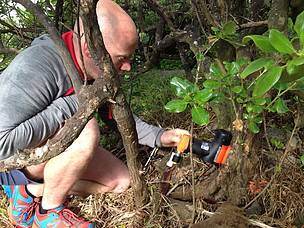 The Goodnature rat & stoat traps are being trialled on Wellington's South Coast, in an initiative to help the capital's little blue penguins.
© Lee Barry / WWF Enlarge 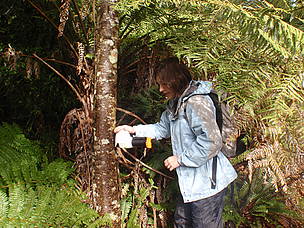 Setting the Goodnature automatic possum traps to the side of trees is a quick job thanks to the new lightweight technology.
© WWF Enlarge