WWF-New Zealand and MAUI63 announce innovation in the fight to save Māui dolphins: INTRODUCING MISSION POSSIBLE

A new tool in the fight to save Māui dolphins from the brink of extinction is here.

WWF-New Zealand today announced a collaboration with MAUI63 to support their project in which an artificial intelligence-powered unmanned aerial vehicle (UAV) will find, follow and provide information to ultimately protect the last remaining 63 Māui dolphins.

Flying overhead with a 50x optical zoom, the UAV can search for the dolphins for up to six hours. The technology is so sophisticated it can distinguish Māui and Hector’s dolphins from other species with over 90% accuracy.

With this UAV, MAUI63 can compile data on almost anything: dolphin habitat, behaviour, changes in water colour and more. Beyond this application for Māui and Hector’s dolphins, the technology has the potential to capture data on many types of marine species such as other dolphins, seabirds and whales.

Using cutting-edge technology such as drones in conservation is not new. Around the world, WWF support a range of projects where drones are used in conservation. Aerial surveillance is a tried and tested model that delivers myriad benefits in the effort to protect endangered species and natural environments.

This technology is not years away, it is available now, and it can help us in the race to save the last 63 Māui dolphins.

WWF is asking New Zealanders to join #teamMaui by helping us raise the $350,000 MAUI63 need to buy and operate this project before the end of the year. This will be a mission, but this is Mission Possible! 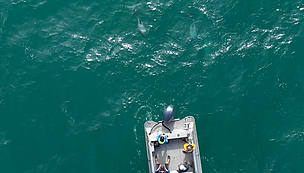