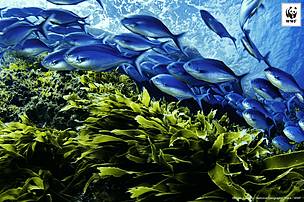 After eight years of campaigning by WWF, partners, and thousands of New Zealanders, the New Zealand government last month introduced a Bill to Parliament to set up a Kermadec Ocean Sanctuary (KOS).

The proposed KOS, about 1000km north east of New Zealand, would be major conservation success – as the largest no take marine reserve in the world, surrounding the Kermadec Islands out to 200 nautical miles. The 620,000 square km KOS would contain the world’s longest chain of submerged volcanoes and the second deepest ocean trench with a depth of 10 km.

WWF-New Zealand’s Senior Campaigner Alex Smith said this week’s Kermadec Science Symposium highlighted the importance of creating a safe haven in the Pacific for some of the ocean’s most exploited and threatened species in one of the most geologically-diverse marine habitats in the world.

“The Kermadec marine region teems with an incredible array of plant and animal life – much of which is found nowhere else on the planet,” he said.

“This area is home to a significant number of threatened and endangered animals including whales, sharks, turtles and large ocean fish such as tuna, sunfish and marlin, and science says that many species are still to be discovered!.

“All the science reinforces the fact that the Kermadecs is an exceptional area – with globally recognised biodiversity and geodiversity hotspots – and it must be protected for future generations now.

“Less than 1% of New Zealand’s oceans are fully protected and our oceans are globally significant for the marine life they contain, so looking after our marine environment is a really big deal for New Zealand and the world.

“When enacted into legislation, this Act will make a major statement to the rest of the world about New Zealand’s commitment to marine conservation.”

This Act would reflect widespread support for marine protection, as Colmar Brunton reported – 96% of New Zealanders think more of New Zealand’s oceans should be protected in ‘no take’  marine reserves - areas set aside as off limits for extractive activities such as fishing and mining.

“We have an amazing opportunity to create the largest no-take marine reserve in the world – so let’s make it happen!”

The free Kermadec Science Symposium 'Discoveries & Connections' is being held at the New Zealand Academy of Fine Arts, Wellington, 11-12 April 2016.